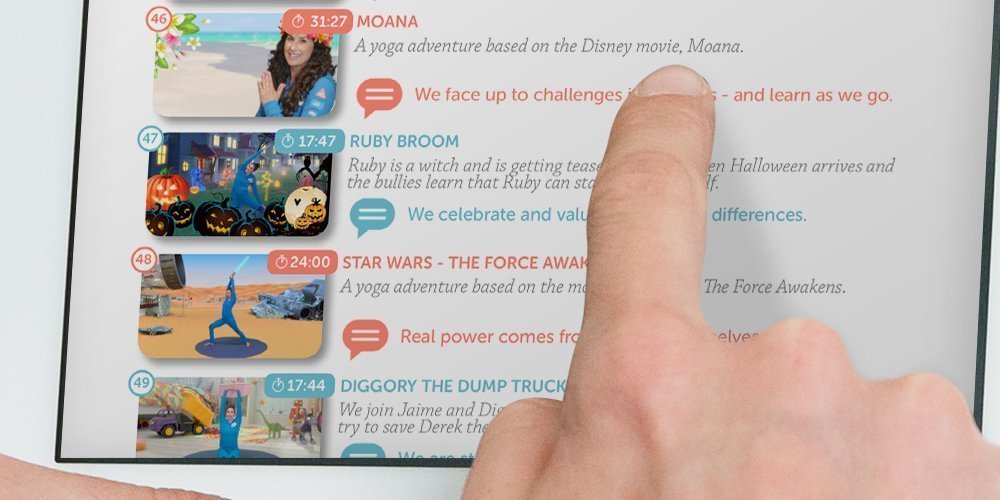 Our first ever yoga adventure (Squish the Fish) was inspired by teachers at a school local to us. They were trying to help the kids in their reception class deal with being dropped off for school by their parents. They were young and weren’t used to being without their parents – and they were feeling anxious. So Jaime decided to write a yoga story for them which would help them reframe their separation anxiety as something else – having fun and being on an adventure!

In Squish we go on an adventure under the sea. We even encounter a shark – but we decide to be brave. After the kids at that school did the yoga adventure with Jaime, the teachers noticed a marked improvement in how the kids were. They also found that they had a new framework to solve the problem too. For instance they were able to ask ‘what would Squish do?’ and use phrases that Jaime had used in the story like ‘We decide to be brave!’

Since then we have made more than 50 yoga adventures, and every one has a moral which is relevant to the 3 to 9 age group. Norris the Baby Seahorse is about how to overcome being bullied. Tiny the T-Rex is about cleaning your teeth. Babs the Beaver is about working together to build a playground in your community. We focus on what kids need to learn to become a positive citizen in our world – and make it part of the story.

We make sense of the message most in the relaxation phase at the end of a yoga adventure. This is like Savasana in adult yoga – we lay down and feel great after doing yoga.  And for kids this is a brilliant opportunity to make sense of the adventure we’ve just been on together.

One of the powerful things about yoga adventures is that kids are in the story, so the moral (a social and emotional one usually) really goes in and is remembered. In the final stages of the session while the kids are lying down and relaxing after the yoga, Jaime lands the message so kids can take it into their life.